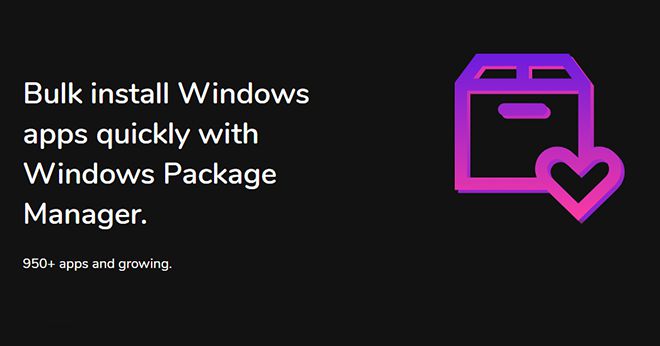 Microsoft is soon adding a native Windows package manager to Windows 10, but it’s limited to a command line interface instead of an easy-to-use graphical interface. While many will be happy that they can simply install apps from the command line, Tweeten developer Mehedi Hassan has created winstall, a web app that uses Microsoft’s package manager to let you create software packages. apps to bulk install all your favorite Windows apps.

It’s ideal for developers who change PCs regularly, enthusiasts who like to format Windows after every major update, or just anyone else who wants to quickly set up a new machine. The winstall site allows you to choose from predefined packs, or to create and share your own list of applications. This could be a bundle of gaming apps including Steam, Discord, Twitch, Origin, Uplay and many more, or a list of productivity apps like Zoom, Slack, and Microsoft Teams.

Winstall is similar to Ninite, but it includes a much wider selection of Windows applications thanks to the fact that it uses Microsoft’s own Windows package manager. Microsoft organizes and manages this list of apps from verified sources, and the Package Manager will eventually be integrated into Windows. For now, you need to register to access the preview version here to make it work.

Once Microsoft’s Package Manager is fully integrated with Windows, you won’t need anything installed on a PC for winstall to work, or even download an app. Winstall generates scripts that can be copied and pasted into the Windows Command Prompt, or you can download the bat or PowerShell script and run it on a new machine.

Ninite is one of our favorite Windows apps for quickly installing a bunch of needed apps, but Microsoft’s Package Manager just has a much larger selection of over 900 apps. Combined with winstall, it’s starting to get closer to the Windows Store I’ve always wanted with a wide selection of desktop apps and an easy way to install them in bulk.