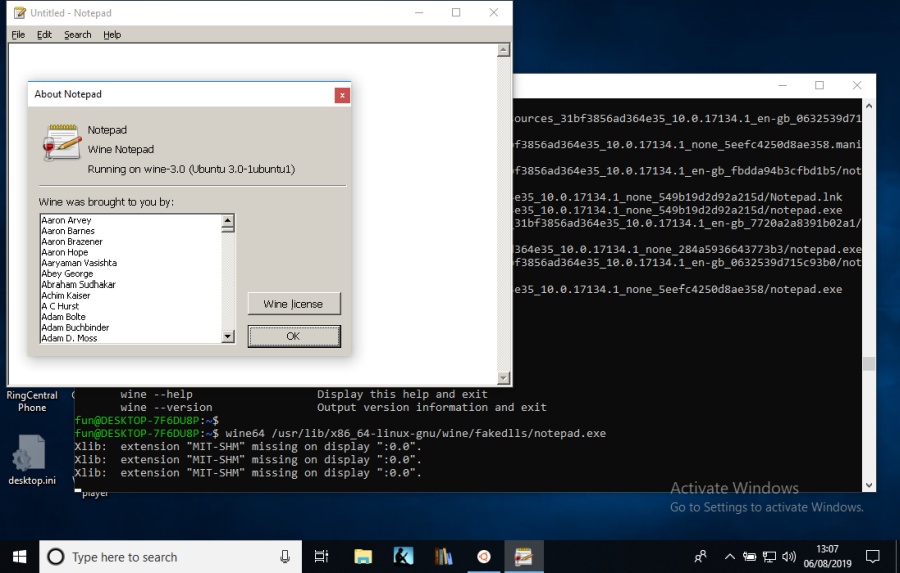 Wine is a compatibility layer that allows certain Windows applications to run on non-Windows operating systems, including Linux and macOS.

So naturally some people have been trying for years to see if they can run Wine on Windows for no particularly good reason.

Until recently, this was not really possible. It is now.

To repeat – there’s no particularly good reason to do this. But it didn’t stop David Gerard to understand the steps and post them online.

So here’s the deal: Windows 10 includes an option Windows Subsystem for Linux (WSL). It is intended for developers who want to use native GNU/Linux command-line tools without changing computers or booting into another operating system.

But people have been finding ways to push the boundaries of WSL for about as long as it’s been around.

Installing Wine basically involves enabling the Windows Subsystem for Linux, installing Ubuntu from the Microsoft Store, manually setting the display environment variable, and then installing VcXsrv in order to get an X.org display server (so you can run Linux programs with a graphical user interface).

You can find step-by-step instructions on Gerard’s blog.

You can now run some (but not all) Windows apps in Windows… by routing them through a Linux-based Windows compatibility layer.

Or, you know… you can just run them using Windows.

Theoretically, this could open the door to running outdated 16-bit Windows applications that may no longer be supported by modern versions of the operating system. But at this point, WSL only supports 64-bit binaries (although the upcoming WSL 2 will support 32-bit).

Update: Gerard figured out how to run 32-bit binaries using qemu to emulate a 32-bit architecture. You can find instructions at the bottom of his blog post.

UWP is dead because Windows apps are dead