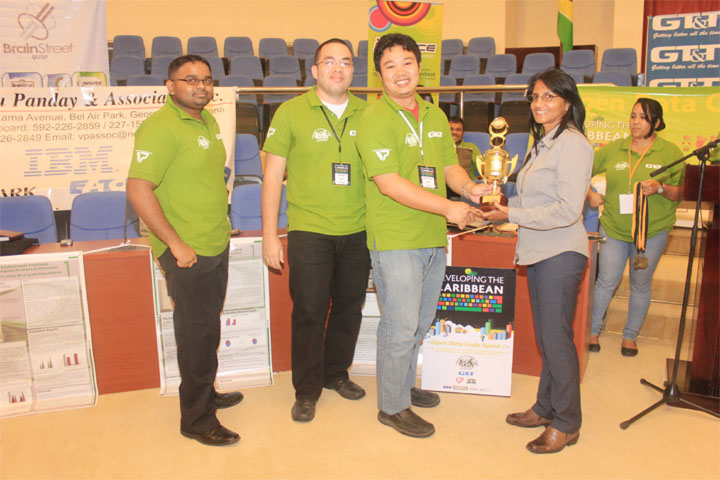 The Sirca team emerged yesterday as the winner of the Open Data Code Sprint, which saw four teams of computer programmers come up with a program idea over a 24-hour period.

The four teams that participated in the event, which was organized by the University of Guyana (UG), were: Sirca, Here for the Food, Code Stars and Banks Pacesetters Programs. Sirca emerged victorious, while Code Stars took second, followed by Here for the Food in third. The winning program will participate in the regional leg of the competition, which will see eight countries participate.

The winning program saw the creation of a web application that targets farmers and allows them to get the price of crops on a seasonal basis. The application, functional but not commercial, is designed for use on mobile phones in addition to computers.

Open Data Code Sprint is a competition involving Caribbean countries where teams of developers compete to find solutions to social problems using open data. This is the first time that Guyana has participated in the competition, which was held at the International Conference Center in Liliendaal.
The competition focused on open data, software innovation and technology trends and highlighted the emphasis on open data as a catalyst for regional development.

Speaking at the simple award ceremony, Canadian High Commissioner David Devine said as the Caribbean continues its search for viable solutions to problems that impact the development and advancement of their societies , such as crime, violence and poverty among others, the advancement of information and communication technologies and forums like the Open Data Sprint competition can offer new tools to tackle these problems. He added: “This is also achieved by developing the talent, the human capacity necessary to compete in a globally competitive world.”

Devine also encouraged programmers to continue to embrace the use of information and communication technologies in all possible sectors for national development so that they can enjoy all the benefits they offer.

The head of the computer science department at the University of Guyana, Lenandlar Singh, said they succeeded in entering the competition and passed it after being undecided whether or not to participate. He said at first they weren’t sure who they should be attending, but eventually people came on board.

Ways to stay compliant and manage your data

How to turn website behavior into buyer intent data