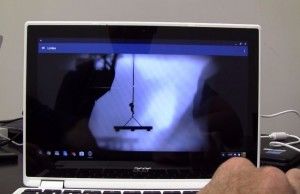 Chromebooks have proven to be capable and affordable computers. In other words, as long as you are ready to do everything in the cloud. Chrome is fine for some, but doesn’t have the same software library as its Mac and Windows counterparts. Codeweavers developers want to change that with a new app: Crossover Android. It will allow users to run Windows apps on Intel-based Chromebooks and Android tablets.

In a video Codeweavers put on YouTube, you can watch someone running Steam and playing Limbo (of course, with mostly weak CPUs and no discrete graphics, the odds of running Overwatch, Doom, or The Witcher 3 : Wild Hunt are all pipe dreams on the current line of Chromebooks). In theory, you should be able to run anything like you would on Windows, including Office, Slack, Photoshop, or whatever else you would run on your laptops. In practice, Codeweavers warns that it is still in active development and not everything will work as expected.

MORE: Chromebooks vs Windows 10 laptops: Which should you buy?

You can sign up for the Crossover Android preview here.

If your Chromebook doesn’t contain an Intel processor, you’re out of luck. However, most of our favorite Chromebooks, including the Toshiba Chromebook 2, Lenovo 100S Chromebook, and Acer Chromebook 14 for Work, run on Intel chips.