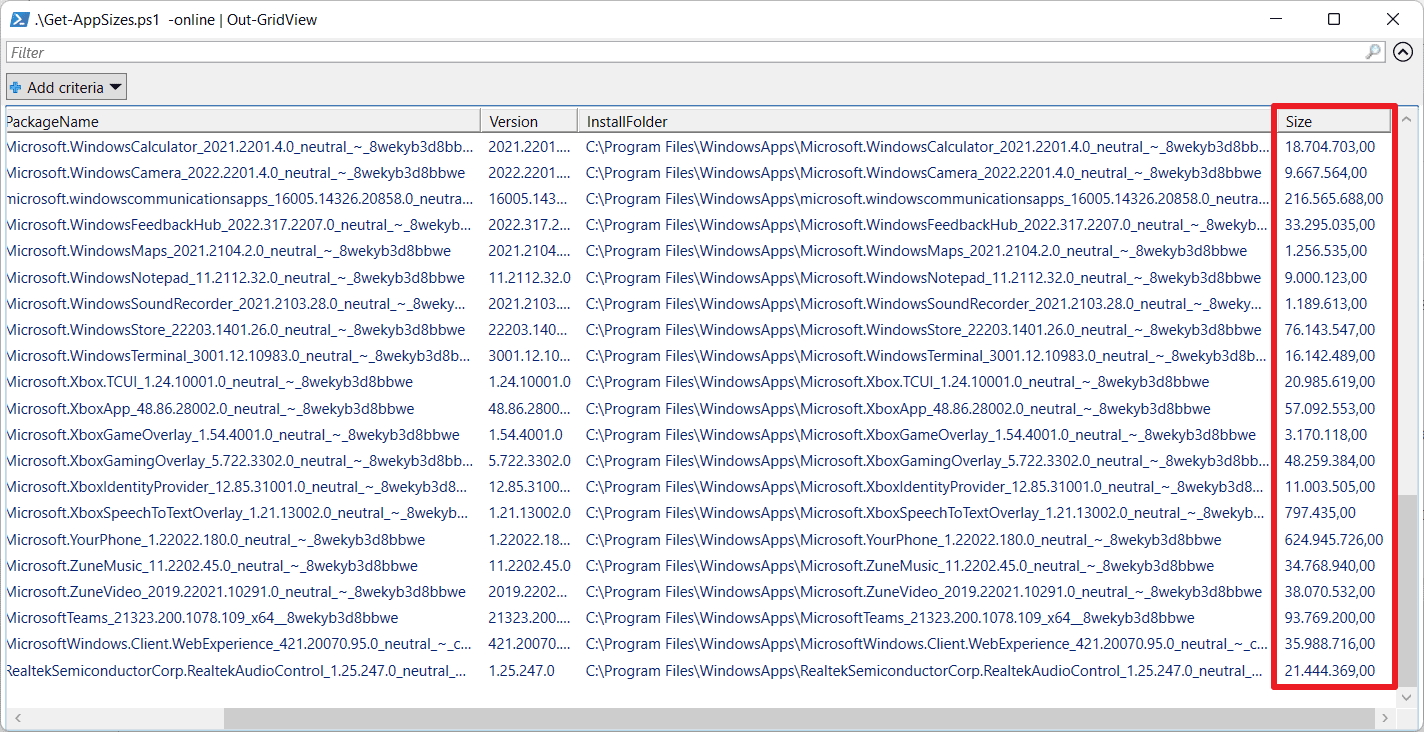 Microsoft’s Windows 11 operating system includes dozens of default apps that are available by default right after installation on first run. Some of these apps provide basic functionality, such as viewing photos, playing media, or editing plain text. Others have a narrow focus that is only useful to a small subset of Windows users.

Most of the pre-installed apps can be removed from the Windows machine, either through Settings > Apps, PowerShell commands, or by using a program like winget, the Windows package manager. Applications take up disk space and some administrators may want to delete them to free up space on a drive

When it comes to determining the actual size occupied by these applications, administrators will run into obstacles. The Settings > Applications list is useless for this, since most default Windows applications are listed with a size of only a few kilobytes.

Storage readings are not correct. The reason for the low number reported for pre-installed Windows apps is that these apps can be installed in multiple folders. Microsoft’s Settings app returns the size of one of the folders because it ignores any other folders that store app files.

The same is true when you run regular PowerShell commands to return application lists.

Michael Niehaus analyzed the behavior on Windows 11. He published his findings in a blog post on his website and created a PowerShell script that returns the full size of default apps on Windows systems.

The PowerShell script is available for download. Simply download the zip archive to the local system and extract it to get started.

Use the Start menu to launch an elevated PowerShell prompt, navigate to the folder where the script is stored, and run .Get-AppSizes.ps1 -online | Out-GridView to get the output.

Note that you must allow third-party scripts to run and select “Run once” when prompted to run it. Cautious users can review the code before running the script to ensure it is safe to run.

The PowerShell script opens a new window, which lists each application in its own line. Each application is listed with its name, package name, installation folder, version, and size. The size is specified in bytes. Most applications are ten megabytes and above. Some, YourPhone, Windows Store, Windows communication apps or Microsoft Teams, are much bigger than that.

Microsoft should readjust the size readings in the Settings app’s app list, as the small sizes of installed apps give users and admins the wrong impression.

Now You: do you remove the pre-installed applications on your machines? (Going through desktop modifier)

Want to know how much storage space apps preinstalled on Windows devices take up? Use a handy script to find out, because Windows itself doesn’t provide those answers in Settings > Apps.