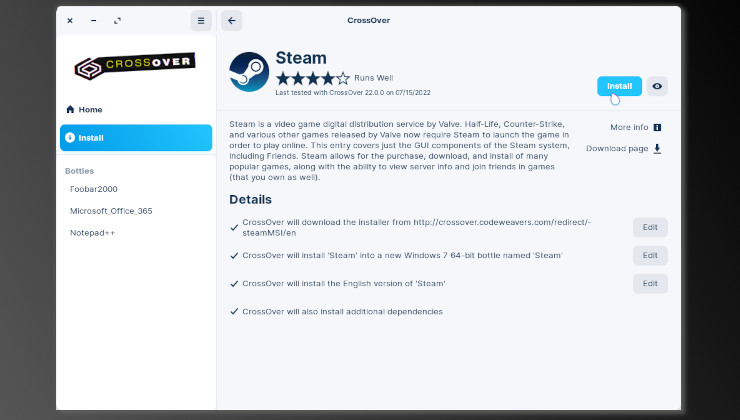 CodeWeavers, the company that works on Proton with Valve and supports the development of Wine, has announced the release of CrossOver 22.0.0. This is their special proprietary interface to help Linux, macOS, and Chrome OS users work with apps and games made for Windows on their platform of choice.

One of the big new features in this release is the refreshed UI, with the last UI upgrade being CrossOver 15 many years ago and no redesign since CrossOver 9. They stated that their goal with the redesign was to make it “more intuitive to use and provide a more modern look and feel” allowing “users to find the things they need to do most often and to align the CrossOver interface with our branding”.

Some of the other big changes coming with the UI overhaul include significant changes to the installation process, an updated search feature. What you get is a more guided installation path for many apps, while still allowing you to override things as you see fit.

They also revamped the bottle view, where you actually install things. Additionally, there is a new Home view, which is a mix of their old All Bottles and Favorites views.

CrossOver 22 includes Wine 7.7, Wine Mono 7.2.0 and vkd3d 1.4. They say you also get initial support for DirectX 12 with a “handful” of well-functioning games as well as Office 2016/365 bug fixes. Looks like they might have some issues with GTA Online bans however, be warned.

Why use CrossOver instead of something like bottles? Well, it’s largely a matter of support. You pay for supported software, while directly helping Wine and Proton development, because CodeWeavers sponsors Wine. CrossOver also has a lot of paid staff working there, with more QA testing, so there’s that too. It depends on what you prefer – the choices are great.